How You Can Still Rock an 80s Boombox with Style

Standing outside of the love of your life’s window with a boombox on your shoulder and your heart on your sleeve is a quintessential 80s scene.

Don’t tell us you’ve never dreamt that someday your own version of John Cusack wouldn’t turn up unexpectedly to blast some Peter Gabriel outside your window. We sure have. 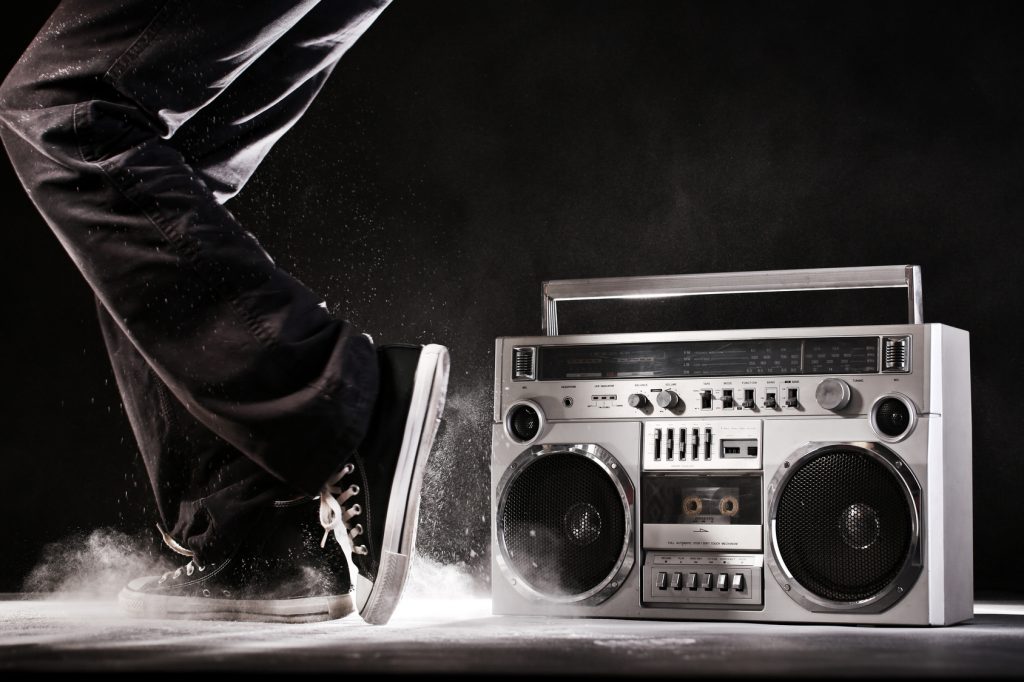 Well, in case you haven’t heard, the 1980s are gone. But fortunately for us, some of its most iconic relics are back.

You heard that right. You can still rock an 80s boombox with style. We’re talking about a real boombox – not an ironic phone case.

Here are some of our favorite boomboxes updated for with updates like Bluetooth for the new century.

The Eton Rukus Solar is a portable sound system equipped with Bluetooth.

As the name suggests, it’s also powered by a solar battery. This means you can leave behind the triple D batteries of the past. There’s also an AC power adaptor for use indoors.

The Rukus Solar connects with virtually any Bluetooth enabled device. It also charges those devices. We think this is a very handy feature, considering the impact Bluetooth has on battery life.

Don’t worry if your taste in phones is similar to your taste in listening devices (read: old school). There’s an aux-in jack available for devices where Bluetooth isn’t installed or needs troubleshooting.

This boombox is light and the handle makes it easy to carry. When it lays flat, it looks like a more compact version of an 80s boombox. This is a plus for those looking for something with a retro look without the size.

The speakers are a bit directional, which means it’s not great for sound projection across a wide open space. Plus, there’s no guarantee it would stand up to weather. It’s likely better to use this solar powered boombox in the sun. 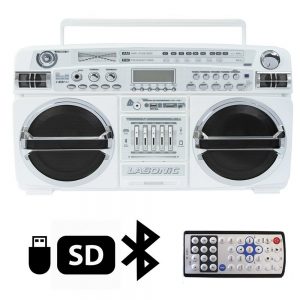 If you’re looking for an 80s boombox that looks the part, look no further. Here’s an updated ghetto blaster designed to satisfy the strongest pangs of nostalgia. However, it does this without sacrificing sound quality.

This model isn’t just any old boombox — it’s a ghetto blaster and a total blast from the past.

While some companies are trying to cash in on the resurgence of boomboxes, we trust Lasonic’s vision when it comes to reinventing the way we experience music. After all, it was Lasonic made some of the most classic 80s boomboxes back in the day.

This updated version of a classic ghetto blaster is Bluetooth enabled and supports SD, MMC, and USB inputs. It includes two 15-watt speakers with the option of adjusting bass and treble.

What makes this model special isn’t the functionality, per say. Rather, it looks the part of the classic ghetto blaster. It even takes D batteries.

So, you can march it down to 7-Eleven when you run out of juice if you want to take your nostalgia another step further.

Don’t worry. Buying batteries once a week is option. It also comes with a power cord, so you don’t need to rely on batteries alone when using it at home.

Sound Design has created a boombox style iPod/iPhone speaker dock for Apple lovers who want to revel in the early days of portable sound systems. 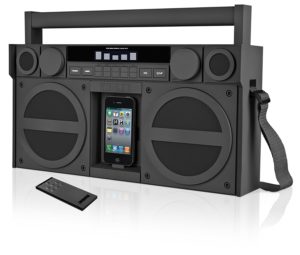 The iHome IP4GZC plays music iPhones and iPods through two 4-inch woofers. It also includes an FM radio connected to iHome Radio to access both FM and Internet radio stations.

This model comes with an AC cord for at-home use. But you’ll need to drop in six D batteries if you’re on the move.

We like that iHome remained light on features while focusing more on the retro boombox look.

It even includes a shoulder strap for wearing it and a rubberized cabinet, just in case. The whole console weighs around 8 pounds. So it is easy to carry. But keep in mind, the 6 D-size batteries required add a good bit of heft.

However, there are some drawbacks, particularly if you’re a features-first kind of buyer. First, it only accommodates iPhone generations 1 through 4. So, if you’re rocking an iPhone 5 or later, this boombox isn’t for you.

Second, there’s no mechanism for charging your iPhone or iPod built into the boombox. So, you’ll want to make sure you’ve got enough battery power before using it. 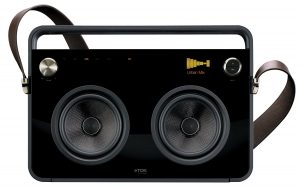 This boombox system isn’t exactly 80s chic, but it is beautiful, modern, and an amazing way to play music.

The Life on Record model combines sound performance with aesthetics. Included are two 6-inch speakers supported by an equalizer and enough settings to give you complete control of the music. The case keeps a classic 80s rectangle shape while updating the look to include clean lines and soft surfaces.

It even includes a modern leather strap for carrying.

One of the things we like about this model is that doesn’t look like a futuristic take on a classic radio. Instead, it includes a minimalist style that looks like it was designed to fit inside your house.

In terms of specs, this boombox supports digital streaming as well as accepting inputs from auxiliary ports, USB, and 3.5 mm. There’s also an option to plug in an instrument and mix it with other media sources. An AM/FM radio is built into the model.

There are two things every consumer needs to know about the Life on Record.

First, this model is at the high end of boomboxes, even though it’s significantly less than a home sound system. Second, it weighs 21 pounds, which is heavy compared to competitors.

However, it offers spectacular sound and it’s still portable, so don’t let these put you off.

Ready to Rock an 80s Boombox with Style?

Your ancient 80s boombox may have gone out of style.

However, there are plenty of modern versions that channel the magic of the moment while playing all different types of media.

Ready to buy a boombox, but not sure where to start? Check out our buying guide.

Related Articles
Stay Connected With Us